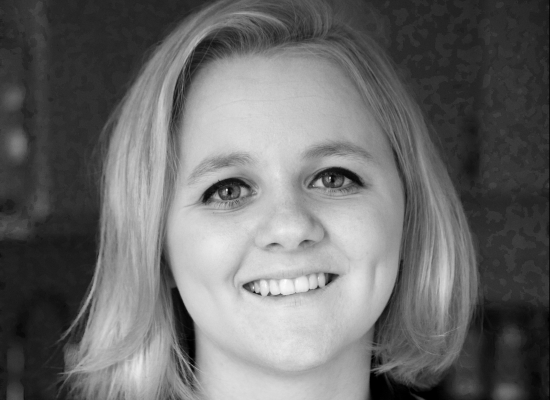 About me short version:

I first fell in love with following and watching football at 12 years of age when I watched Henrik Larsson make his debut for FC Barcelona in a 2-0 win over Racing Santander. I watched the game on TV and even though I had played and loved football since the age of 5, that was the first time I had truly enjoyed actually watching it.

It became the beginning of a long and lasting relationship between me and Spanish Football. At 15 I discovered that my passion wasn’t only to watch the game but to also write about it, to transmit to others what’s so special, so great with this sport.

My own playing career in many ways saw it’s end when I suffered an ACL injury at 16. It was straight after I had finished my best ever season, making my debut and taking a starting spot in the first team with 10 goals in 11 matches. All while becoming regional champions at both U16 and U18 and reaching the final of the U16 Swedish championship. I was on my very high when the injury came leaving me out of football for over 10 months.

The time during my injury, but even more so after was very difficult but one that taught me a lot about life and also about the psychological part in sports and what a huge impact our mind and surroundings actually have on the performance on the pitch.

Somewhere along the way the passion I had for playing the game got transmitted to instead write, learn and understand it. 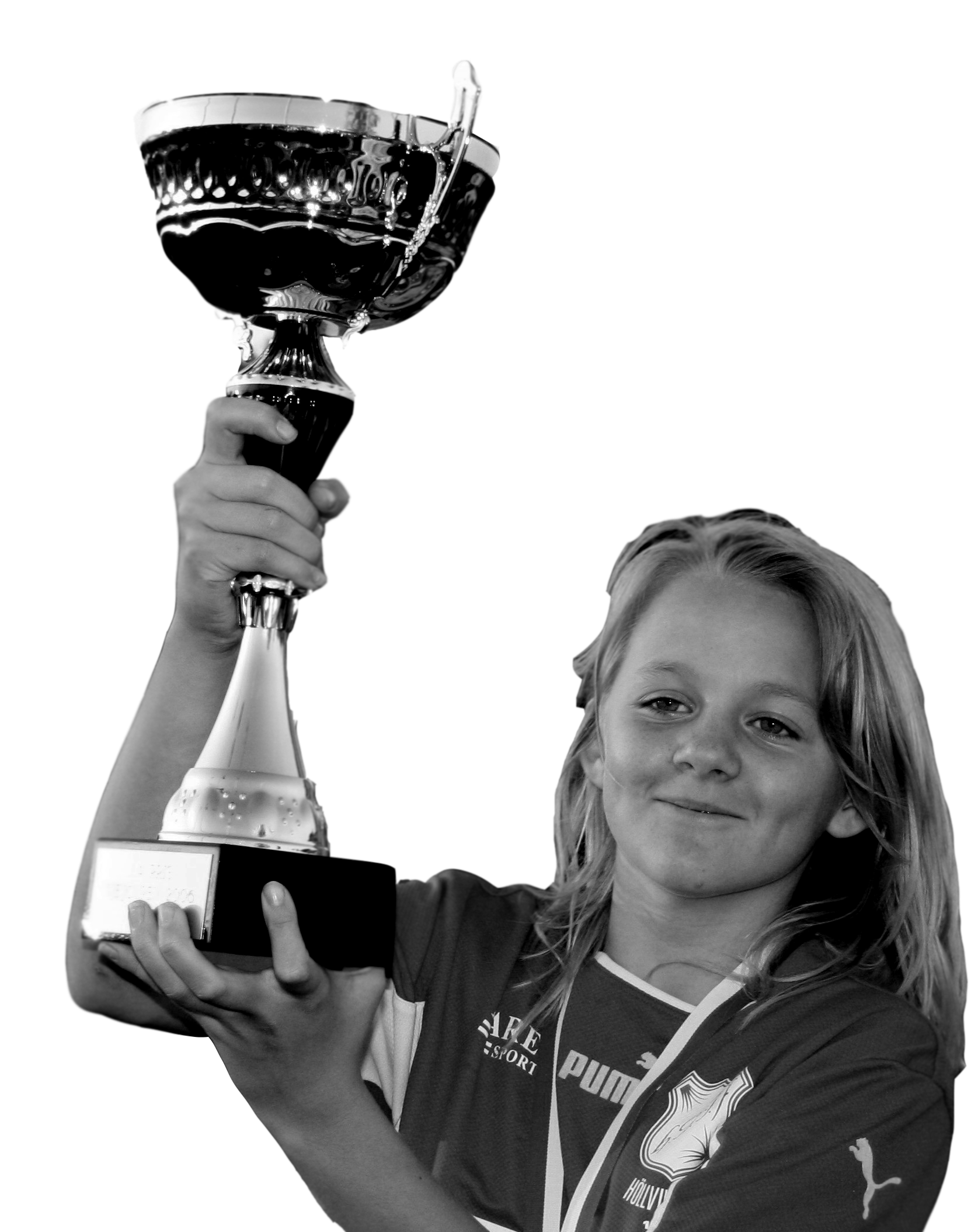 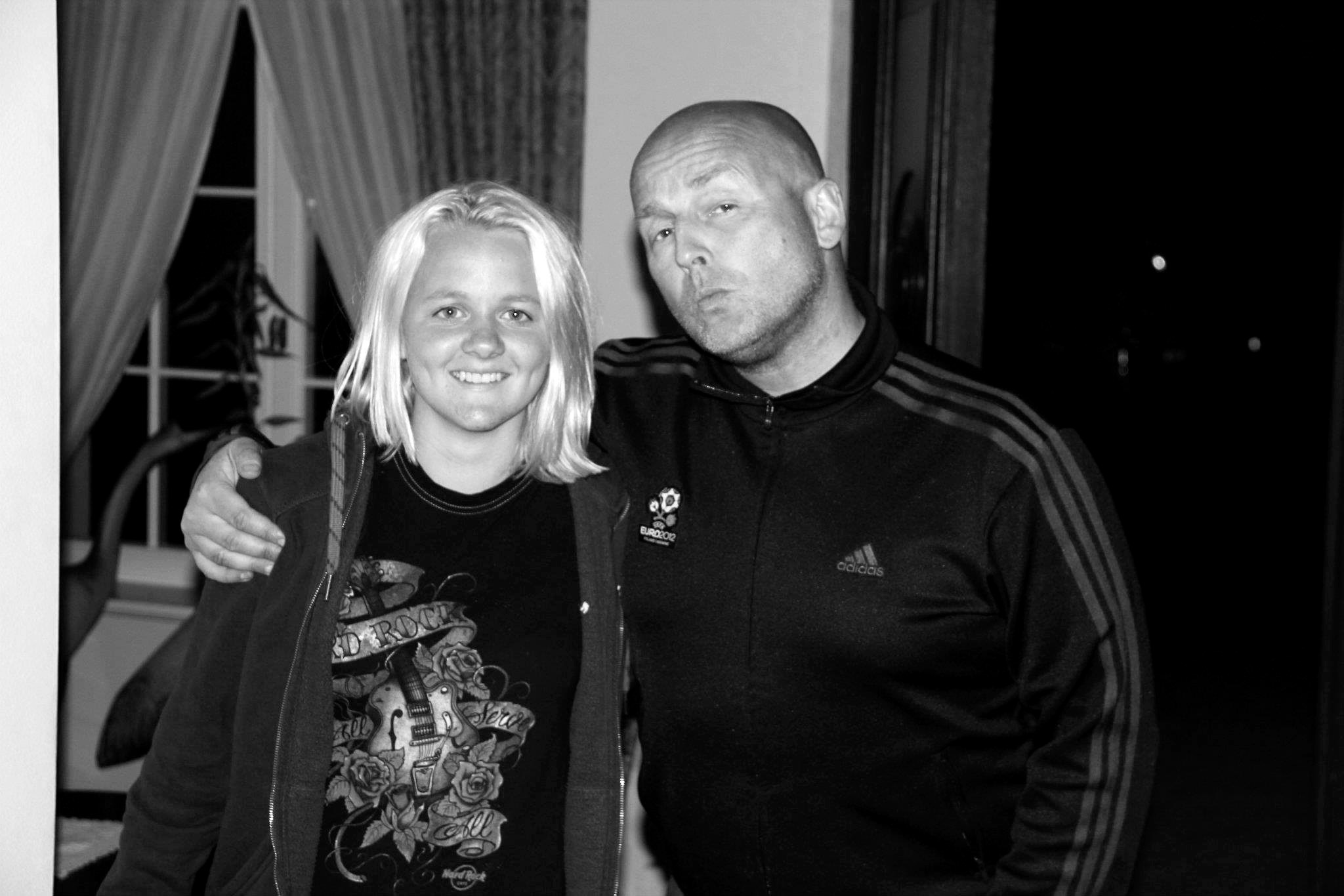 I began studying journalism and had a four month long internship at FourFourTwo. I finished my studies with creating a magazine about Sports Journalists, in which I interviewed journalists, players and fans from all over the world. It generated not only some great contacts but more than anything three fantastic and inspiring mentors, Graham Hunter, Johanna Frändén and Johanna Garå, have all come to help me with advices and tips as I’ve started my own career within Sports Journalism.

I remember when during the European Championship in Poland/Ukraine 2012, I had the opportunity to follow Hunter for a day as he worked for UEFA following the Spanish National Team. It was an incredible experience that left me with no doubt that this was what I wanted to do.

Shortly after, still only 19, I moved to Barcelona in August of 2012. There I learned Spanish, was able to build a big international football network and gained an in-depth knowledge of Spanish football by frequently hanging out at Camp Nou, MiniEstadi, Nova Creu Alta and Montilivi, while also travelling out to Catalonia’s smaller grounds as I played myself for CF Barceloneta. I had started my own career as a Freelance Sports Journalist. By somewhat harassing different press-guys for accreditation to the big games I retrieved the opportunity to write for some of the larger Swedish outlets.

With a passion for writing and football in combination with stubbornness and dedication I’ve gotten a great starting point to my career.

After returning to Sweden for a short while I moved back to Spain in 2018, as I embarked on a new exciting journey starting the project of writing my own book. A book about a story that for years fascinated me - that of Real Oviedo a football club that was saved by it’s fans and in many ways the world. After several months in Oviedo, I’ve later made Vigo in Galicia my home base as I on a daily basis now work covering the northern LaLiga teams for different international media outlets.

In the summer of 2018, at 24, a dream of mine came true as I got to cover my first ever World Cup. Doing it for FIFA.com, following my own country Sweden as they played their best World Cup in 20 years. It was a truly incredible experience.

I’m still only in the beginning and have a long way to go but I’ve already enjoyed one-on-one interviews with great sports personalities like Ander Herrera, Juan Mata, Michu, Iñaki Williams, Xabi Prieto, John Guidetti, Patrik Andersson, Vicky Losada and Elias Ymer among others, and can’t wait to add on to the list.

I have had the opportunity to write and/or report for amongst many others: LaLiga, LaLigaTV (Mediapro), FIFA, StriveSport, LaLigaLowdown, TV4, Fotbollskanalen, Svenska Dagbladet, Dagens Nyheter, Aftonbladet/Sportbladet, InsideSpanishFootball, The Offside Rule Podcast, FourFourTwo, Marca in English and Gazetta World and I can’t wait to get to add to this list as well. 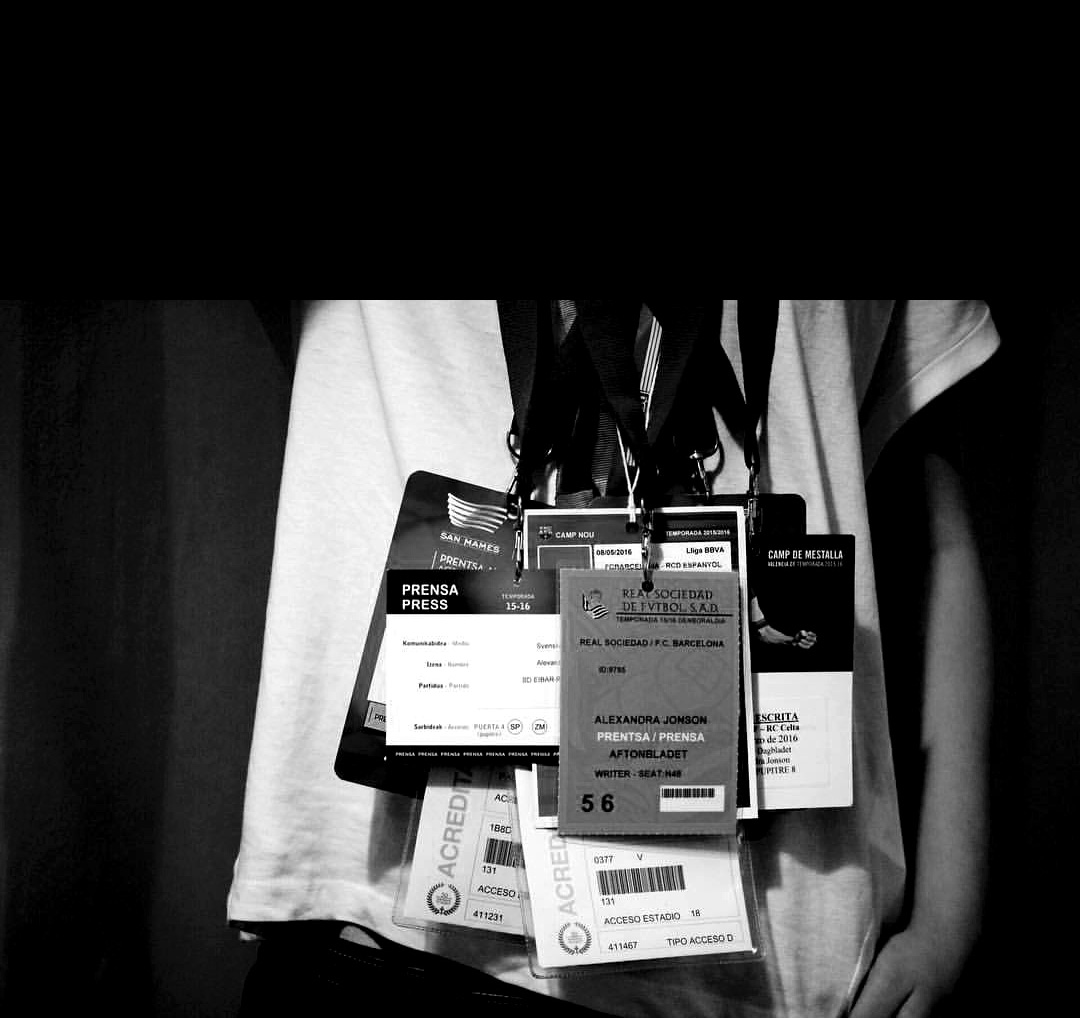 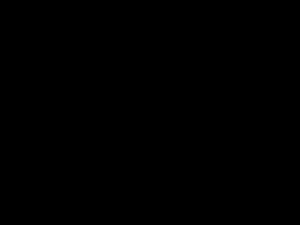 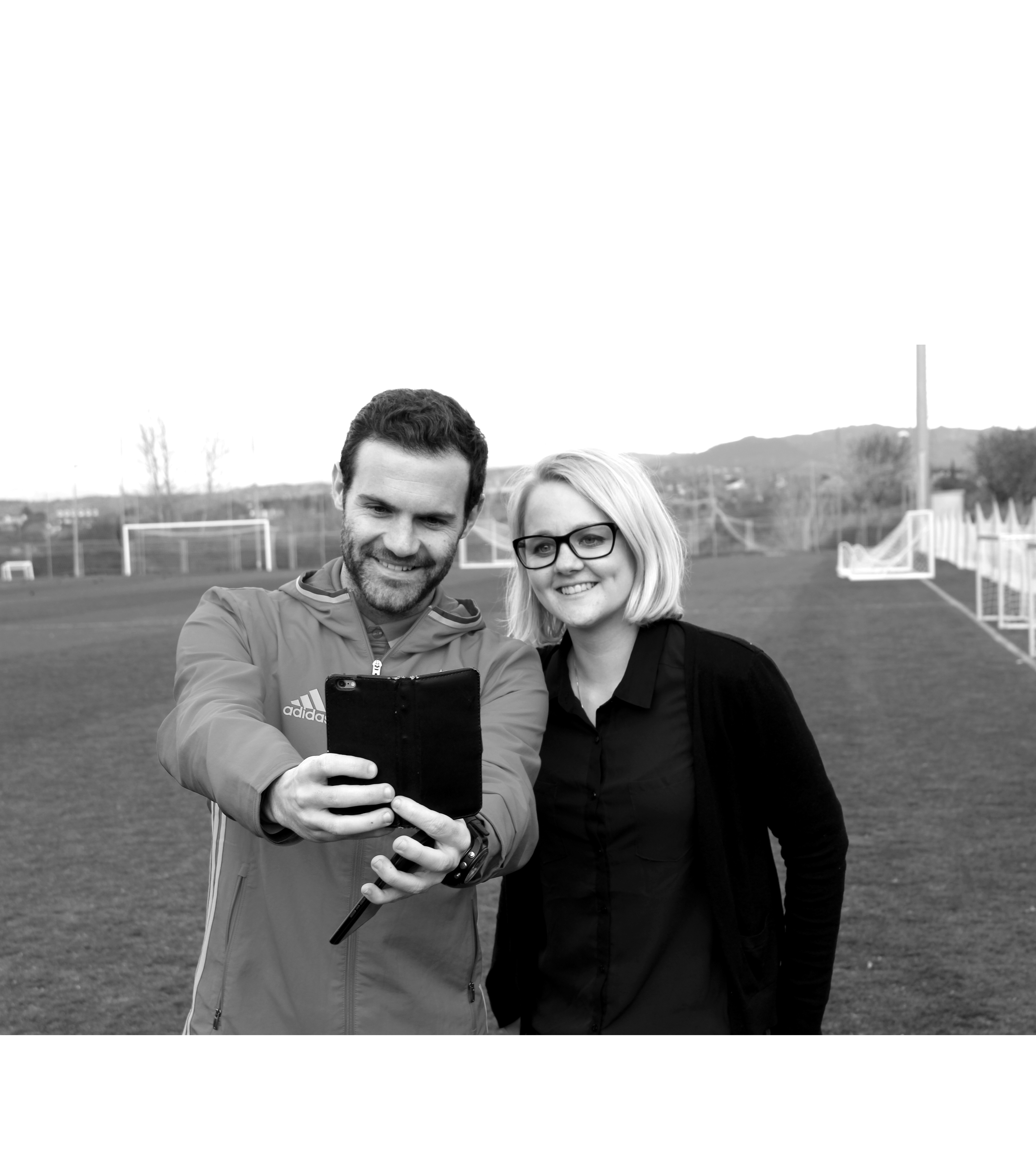 I don't do things the traditional way and it sure hasn’t always been easy, but I’ve done it my way. The most important being to get people to see beyond the player, beyond the game. See the person, but foremost to get to see the story.

I’ve had the privileged to be able to do that, had the janitor at Cementiri de les Corts (outside Camp Nou) tell me that for him FC Barcelona isn’t about football, for him it’s about Catalonia vs the rest of Spain, it’s about politics about identity. To in Eibar meet Roberto, Yeary and Iván who daily pinch themselves in the arm because after two seasons they still can’t believe that their club is actually playing in La Liga.

I’ve played football in the middle of that night at La Concha beach in San Sebastian and seen Antonie Griezmann score a screamer in A Coruña. Met the ‘pope’ in Granada and had kids sing the ‘Guidetti’ song for me in Vigo. Spontaneously eaten dinner with madridistas and seen how 50,000 Athletic supporters conquered the city of Barcelona. From Oviedo to Sevilla, Valencia to Madrid.

So far it has been a grand trip, but I can’t wait to add onto my experiences and I know there are a lot of stories out there waiting for me to find and tell, maybe for you.