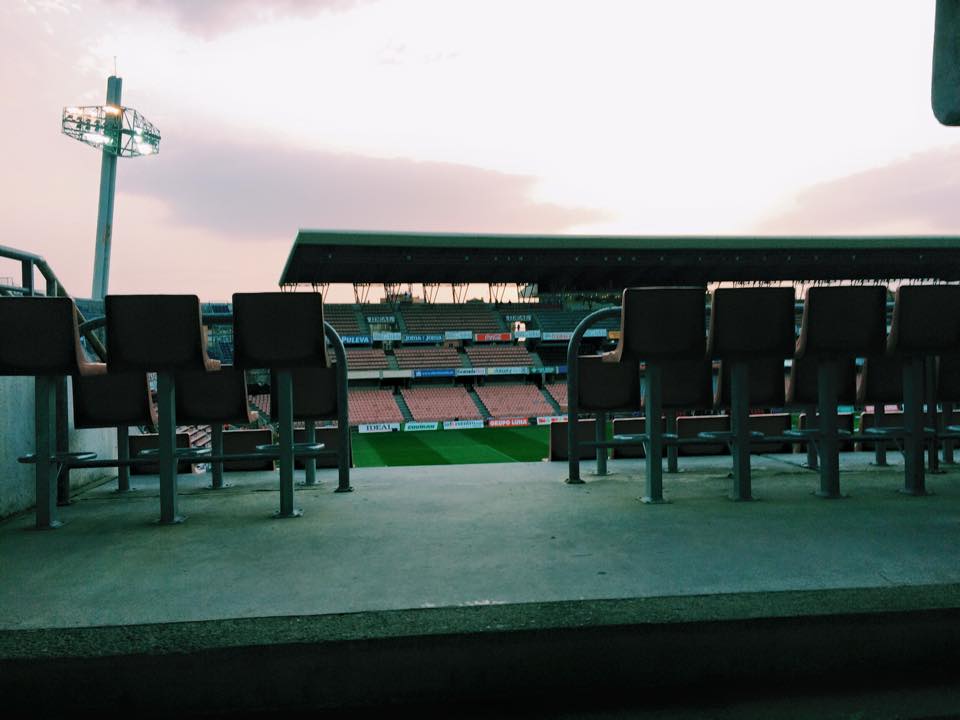 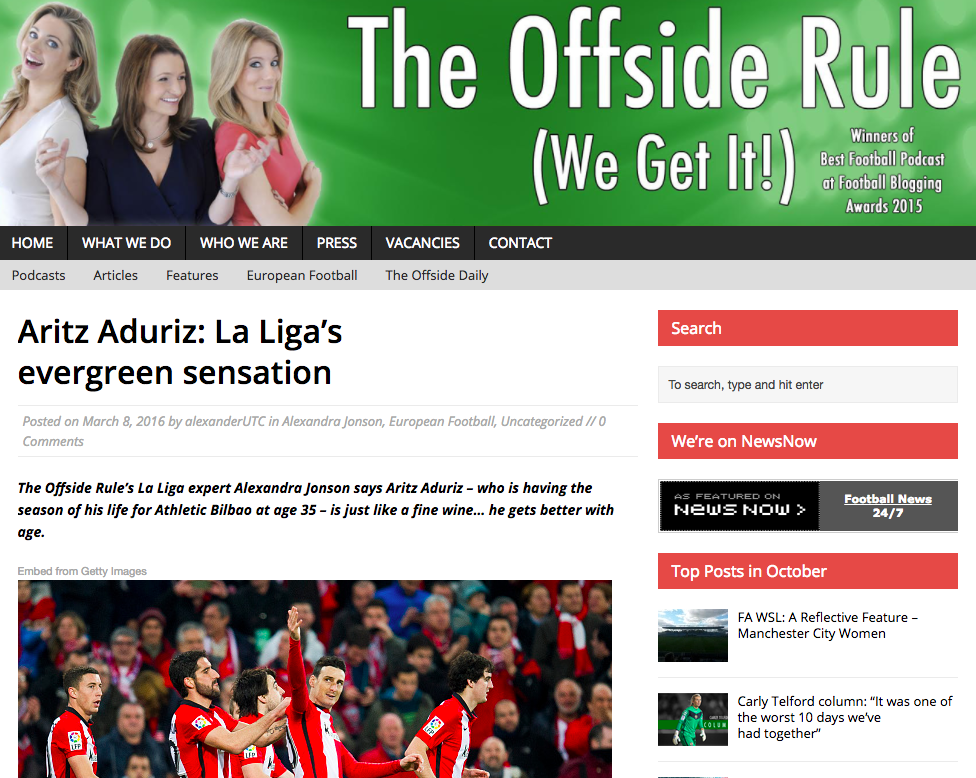 The Offside Rule’s La Liga expert Alexandra Jonson says Aritz Aduriz – who is having the season of his life for Athletic Bilbao at age 35 – is just like a fine wine… he gets better with age.

“I have never seen this, ever,” Ernesto Valverde said during his post match press conference on Wednesday night. “Usually you think: ‘He’s 35, he has to drop at some stage,’ but you look at him and you don’t want the league to ever finish. He’s incredible. I have never seen this in an outfield player. I have run out of adjectives for him.”

Athletic Club had just beaten Deportivo La Coruña 4-1 at the San Mamés with Aduriz becoming only the sixth player in La Liga history to score a hat-trick at the age of 35, raising his tally to 17 league goals with ten games remaining. It’s a total only one player his age has ever reached in an entire season – Ferenc Puskas back in 1954. No Athletic Club player since Fidel Uriarte, 48 years ago, has managed to score as many after just 27 matchdays.

Add his seven further goals in the Europa League – where he is the top scorer – two in the Copa del Rey and four from the Spanish Supercup, and Aduriz has scored a total of 30 goals this season. Of the players going to this summer’s European Championship in France, only Cristiano Ronaldo (39) and Robert Lewandowski (33) have scored more. Yet there are doubt if Aduriz is even going at all.

Aduriz has only represented the Spanish national team once, playing 15 minutes against Lithuania in 2010. Since then Vicente del Bosque has refused to call him up and seems intent on making Diego Costa, Paco Alcacer and Alvaro Morata his three forwards in France. None are even close to the goalscoring numbers of Aduriz… and not just this season.

Since Aduriz returned to Athletic Club in 2012 (following two previous spells with them) only Cristiano Ronaldo and Lionel Messi have scored more La Liga goals than his 65. The only real argument for why Costa, Paco or Morata should go ahead of him is the fact that they are all significantly younger (Ed. – Yes, even Costa).

Yet, paradoxically, age is what seems to have made Aduriz this good.

“People say goals are innate, but I think that’s debatable” he said to El País in 2015. “In football, like in life, I think you are learning continuously. There are a few privileged people who are born with it, but I think I have learnt it”, he said, concluding: “I was always a late developer.”

For those who follow Spanish football, Aduriz has always been a good player but he has never been this good. Like fine wine, he is just getting better with age. Up until his 31st birthday he averaged 0.29 goals a game. After it he has averaged over 0.55.

“Physically I don’t know if I’m at my best” he claims. Yet he still seems stronger and quicker than he has ever been, confessing to “playing with virtually no pain”.

And he sure is playing.

Few if any have played more than Aduriz’s 44 games, or 3,638 minutes this season. But he still wants to play more, because he genuinely enjoys football. “He lives the game so intensely that age is no handicap,” Unai Emery, his old coach at Valencia, told El Correo.

When Athletic Club reached the Copa del Rey final last season, Mikel Rico stated that if they won he would take it upon himself to build a statue of his teammate. Aduriz had scored in the semi-finals, quarter-finals and the last-16.

Athletic lost the final, but the striker started this season with a hat-trick against Barcelona, bringing the Spanish Supercup to Bilbao. At 34, it was his first silverware – and the first trophy Athletic have celebrated in 31 years.

Whether he plays at this summer’s Euros or not, he is already a living legend in Bilbao.

It’s not just the goals that make him a good option for Spain either. Aduriz knows the 4-3-3 system of Spain well, the same system Athletic play. He is an exceptional header of the ball, the best Xavi Hernandez says he’s ever seen, and on Sunday evening, as Athletic defeated Sporting de Gijon, he got his ninth assist of the season.

Nearly everything the team does goes through him. “We play for him; he conditions everything we do,” says Valverde.

When Spanish radio station Cadena Cope asked Fernando Llorente which three forwards he would bring to France, and he said: “Right now the one you would not leave behind is Aduriz.”

When Villarreal’s Roberto Soldado was asked recently if he had a chance to get in the Euro squad, he replied that “saying that is lack of respect to Aduriz.”

As his goals keep coming, the push to get Aduriz to France is constantly growing. And so is the pressure on Vicente del Bosque, who recently admitted to Marca that Aduriz “is an exceptional, unique case”. Despite saying “we don’t select the national team by popular vote,” he added that “when everyone says Aduriz, Aduriz, Aduriz, it’s something we have to think about”.

Is there really anything to think about? It’s quite bizarre that an argument for why Aduriz should go to France has to be made. What we should be debating is whether or not he should be a starter, and I’m not sure that is worth debating either.

Still, the fact remains that there is no certainty he will even be in France this summer. And if that’s the case then the tournament may miss out on one of the world’s best strikers at his peak, just because his birth certificate happens to read 11th of February 1981.